English is a Language and optional course for degree programme under Choice Based Credit System implemented from the academic year 2019-20. The programme is affiliated to Mangalore University.

It was in June 1958, when St. Philomena College, Puttur started functioning the Kannada Dept. was interlinked along with it. When we glance the history of the department the ansesters who toiled for the birth and growth of the department should not go unnoticed. Prof. M. Venkatramana Bhat (Popularly known as M. V. Bhat and V. B. Moleyar) was the founder member of the department. Later he became the first head of the department till his retirement (1994) he successfully worked for the progress of the department in particular and of the College in general. Before coming to Puttur he served in Christen College Madras. It was a through Prof. M. V. Bhat’s effort that our college could get volumes of old Kannada Literature from Christan College Madras. He was instrumental in Starting the Kannada Sangha in our college in the year 1975. Due to his illness he expired during the year 2009. Though many staff members entered the department they left for different reasons at different times. The names of those who served in the department till their retirement is worth mentioning Prof. P.M.V. Bhat rendered long valuable service (1967-1996).

Hindi is a Language optional course for degree programme under Choice Based Credit System implemented from the academic year 2019-20. The programme is affiliated to Mangalore University.

Sanskrit is considered the root of all languages. Being the mother language, Sanskrit has a profound influence on all other modern Indian languages. It is the basis of Indian culture too. The study of Sanskrit opens the flood gate of wisdom, knowledge and values. As a treasure of knowledge the study of Sanskrit should be an integral part of the academic exercise in an educational institution.
With this intention the department of Sanskrit was established in the year 1982. In the beginning Sanskrit was introduced to the Pre-University course and later extended to the degree level. The emphasis is given to the application of literary knowledge in different streams namely, B. A., B. Com and B. Sc. In the academic year 2014-2015, Sanskrit was introduced to the BSW students too.
Since the establishment of the department, Prof. D. Ishwara Shastry is the Head of the Department.

Intimation to the Students 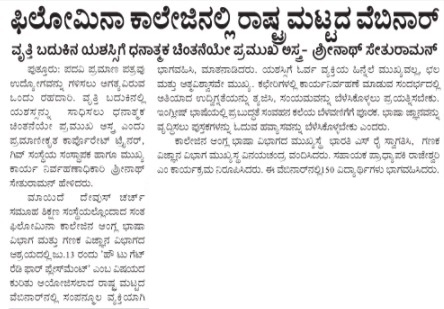 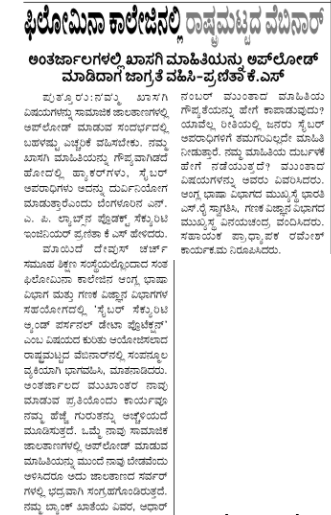 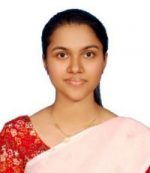